← Superheroine of the Night: Maria Sharapova
The Attack of Wango Tango →

January played a sociopath, Kim Brody, on an episode of Law and Order (“Quit Claim”). She was a beautiful, calculating, manipulative ingenue whose visible emotions ranged from raising an eyebrow to pursing a lip. She was always a step ahead of the game. She played each moment with straight confidence born in the knowledge that she always got away with everything. She was an ice queen who hated everyone because they didn’t love her. This episode played on TNT a couple weeks ago and when my brother asked “who’s that?” I answered: 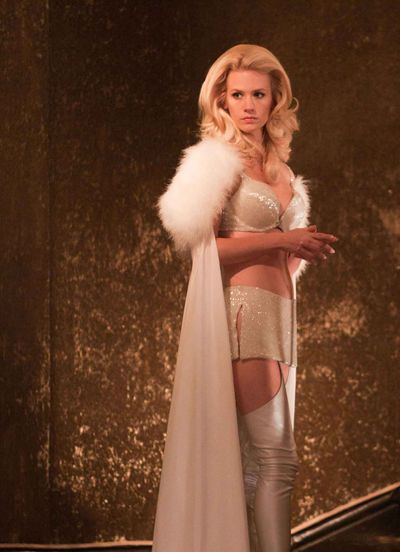 The consensus seems to be that January Jones’ performance in X-Men: First Class is at best “wooden” or mimicking her (Emmy-nominated) role as Betty Draper/Francis on AMC’s Mad Men. Well, I don’t think it is going out on a limb to say that the Emma in this movie shares many characteristics and circumstances with Betty Draper and I find it likely she was hired to play that role. But I will go out on a limb and say — actually, January’s was one of the better performances. Not on par with McAvoy and Fassbender but I much prefer her Emma to Jennifer Lawrence’s Mystique.

The Emma Frost in this movie is not the one running around in the comics today. She is a product of her times, her upbringing, the desires she’s not allowed to voice, the power she’s not allowed to have. In the eyes of her society, both the one she works within and the larger one, she is not meant to be much more than a very pretty hanger for very pretty clothes. She — both Emma and January — does that very well.

But there are moments of more:

+ When Shaw calls her pretty and she responds with a genuine girly smile — which quickly morphs back into her standard dismissive ice queen stare when he sends her off for ice.

+ When she watches the Russian general in the throes of his version of passion with her illusory self; she says “Pathetic” with a look of bored disgust — tinged with a longing for actual passion in her life (cue Magneto’s entrance).

+ Her line about war implying the other side can’t possibly win is delivered with calculated disdain. She betrays nothing.

That’s the main point — she betrays nothing. It’s a very fine line between betraying nothing and being nothing but as Betty, as Kim, and as Emma (and quite honestly, as herself in the public eye), January Jones does it. And it fascinates me.

Plus, mad props for wearing these shoes while pregnant.