Nic is in Cannes promoting her role as Princess Grace in the film Grace of Monaco. 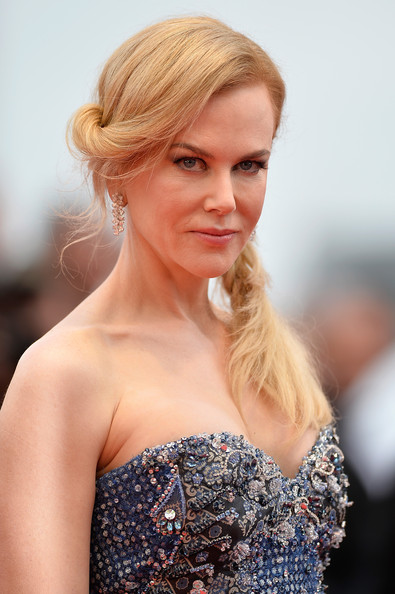 But she is dressed in the style of Queen Elsa of Arendelle.

END_OF_DOCUMENT_TOKEN_TO_BE_REPLACED

Daenerys Targaryen is my favourite character in the HBO series Game of Thrones. She crept up on me when I first watched season one. I started out loving Arya (still love Arya) but then Dany started doing things I would do as every character I have ever played in any fantasy role-playing game ever. She’s a character I could have come up with and she’s the character I love. Thus I am working on my own Ready-to-Wear Daenerys look to wear at upcoming conventions, ren faires and the like. I follow a bunch of tumblrs dedicated to Game of Thrones Style and Daenerys has her own…maybe it was my crowded dash but when I saw Diane’s first two Cannes festival looks, I thought: Khaleesi!

This is an AMAZING dress and she looks stunning in it. I called it Gladiator Chic when I pinned it and with different shoes it could be a comic book superheroine look as is. Diane continues to be my ultimate fashion superhero.

END_OF_DOCUMENT_TOKEN_TO_BE_REPLACED

So I’ve noticed a little bit of a trend lately. Fashion birds. I don’t mean this:

Malaika Arora dressed AS a bird (for a good cause). But this:

END_OF_DOCUMENT_TOKEN_TO_BE_REPLACED

Diane‘s only real competition for Best Dressed of the night:

Salma is also in pink, but a very understated blush, and the gold accents just bring it all to a higher level of sophistication and glamour. She looks amazing.

Also amazing, especially after her strange showing at the AmfAR gala, Kirsten Dunst:

END_OF_DOCUMENT_TOKEN_TO_BE_REPLACED

Fan Bing Bing wore a tribute to Atlantis (does that make her Namora?):

The starfish purse is a cute touch and yes, she has Princess Leia hair:

END_OF_DOCUMENT_TOKEN_TO_BE_REPLACED

Not all superheroines dress the same. There are a lot of skimpy bustier and miniskirt combinations, and the ubiquitous jumpsuits, and when in doubt look for tall boots and chunky bracelets. But sometimes heroine chic is simply a matter of character:

I’m not certain which character Emmanuelle Béart is best for — a new incarnation of Doctor Who or someone in Gotham are closest, I think — but she definitely comes off heroine chic. And thanks to accidental colour-coordination she has a perfect partner in crime-fighting in Diane Kruger:

END_OF_DOCUMENT_TOKEN_TO_BE_REPLACED

Superhero of the Night: Apichatpong Weerasethakul (Cannes Closing I)

The 63rd Annual Festival de Cannes has come to a close with the Palme d’Or awarded to:

Apichatpong Weerasethakul for “Uncle Boonmee Who Can Recall His Past Lives”.

END_OF_DOCUMENT_TOKEN_TO_BE_REPLACED

It’s True! Dree Hemingway emerges as superheroine of the night. She is joined by Emily Blunt and Ana Beatriz as a Phoenix and a Diamond, respectively (vote in the poll!). Grace Jones is the best supervillain of the night EVER (though King Karl continues to be my favourite). Worst Dressed includes Marion Cotillard, Kirsten Dunst and Elizabeth Banks while Best Dressed honors Camilla Belle, Michelle Williams and Jennifer Lopez. In the middle are Michelle Rodriguez, Karolina Kurkova, Kate Beckinsale and more. Best Dressed Overall?

I realize that I say “Diane Kruger, in Chanel, is flawless fashion” a lot, but:

Diane Kruger, in Chanel, is flawless fashion. I honestly did not think she could do as well this year as last:

END_OF_DOCUMENT_TOKEN_TO_BE_REPLACED

Dear Suzanne Engo. I get that you love them but Converse are not appropriate footwear when wearing a gown. Even if your gown is a Smurf-blue ripped up mess that hugs your body in all the wrong places. This is BAD. Signed, All of Us.