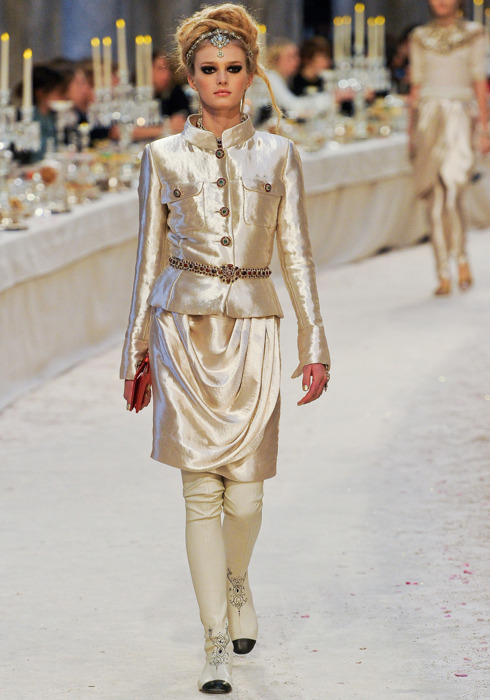 When Star Wars met Moulin Rouge. Okay, maybe it’s me (totally plausible) but this made me think Shiny Hoth Leia followed immediately by the finale song of Moulin Rouge!. So it’s clearly Hoth Satine. Or Satine Stormtrooper, which is not quite as accurate but a cooler phrase. But let’s take a closer look at the most heroine chic element:

END_OF_DOCUMENT_TOKEN_TO_BE_REPLACED

I clearly should have posted this about a week and a half ago, but: welcome to the Summer Schedule of Red Carpet Superhero! Posts will be fewer as I am off and away (and there are some fewer awards shows and gala events to cover). But never fear, my commitment to heroine chic is STRONG and I will pop up at the least weekly and return to a more frenzied pace as we approach Fall (and hopefully cooler temperatures). I’ve gotten some great suggestions for content so do please feel free to email ( tightropemarvel@gmail.com) or tweet (@tightropemarvel or @magnetgirl) me suggestions and/or any images you may stumble upon!

And here is our superheroine of the day:

Laura Steel as Chanel Girl. Which is not a great name and might be misunderstood as Channel Girl (isn’t there a kid in the second X-Men movie who can channel surf with his eyes?) but CoCo has been taken over by Conan O’Brien. And Chanella is too Disney crossed with Barbarella which is … no.

You know what? She’s a Chanel Bot. Like a Doom Bot to Karl Lagerfeld’s Doom (EPIC IDEA).

Anyway, I would totally wear this. Like. Everywhere. I would make sure to get a top that fit and wear FAR fiercer shoes (I mean, really) but if there existed a Chanel superhero THIS is it, ne?

Actually the top should just be the logo. THEN it would be perfect.

I saw this picture and said “Oh hell yeah!” Literally. Out loud.

You totally did, too, right? Now, this is ridiculous. But it is certainly heroine chic. And everyone knows if you wear purple and red you are a villain.

But she wasn’t the only villain there:

END_OF_DOCUMENT_TOKEN_TO_BE_REPLACED

Once upon a time, in fashion-occupied France, Berlinele and her beau, Pacey*, arrived in Nice in their civilian identities — Diane Kruger and Joshua Jackson:

END_OF_DOCUMENT_TOKEN_TO_BE_REPLACED

Why I want to be in France.

I want to go to France. I’d brave the volcanic ash cloud (which, by the by, I think would be an awesome plot for a super-villain: the volcano that held Europe hostage!).

END_OF_DOCUMENT_TOKEN_TO_BE_REPLACED

I told you I love this event! Now, Emma is the best of the night, Tina needs to burn that thing she wore, Chloe is never boring, volume and colour made a splash, Katy lit up, Bar looked like Ms. Marvel, Karolina and Margherita are secretly Krytonian, Kristen secretly wants to punch people (maybe not so secretly), Kate was Grace Kelly and Diane was Princess Leia.

Also, Karl Lagerfeld was there:

Soon all of Europe will be represented.

Throughthebrush submitted this revelation by way of The Fug Girls [And a special thanks to the Fug Girls for the jump in participation at Jumpsuit Wars. Don’t worry, Pacey WILL get a winner’s post (like I need an excuse to dedicate a post to Joshua Jackson). Watch this space!]

Anyway, back to France’s new supervillain:

END_OF_DOCUMENT_TOKEN_TO_BE_REPLACED

“That is because there is only culture.”

So there is absolutely amazing interview in which Karl espouses about everything and nothing in his own special Lagerfeld way. It’s conversational, controversial, and long, but seriously, read the real interview not the many soundbyte versions out there. It’s entirely worth it, he’s a trip, and you will actually understand what he is saying, as outrageous as it sometimes is. Outrageous and secretly brilliant. Like Dr. Doom.

Meanwhile, he’s also responsible for this: